What to do in Malga Ciapela in summer

A territory to explore

If you are looking for advice on what to do in Malga Ciapela in summer, or want to know the most beautiful hikes and trails that can be taken starting from Camping Marmolada Malga Ciapela this is the right place.

Positioned at the foot of the Marmolada, the Marmolada Malga Ciapela Camping is a prime access point to the many hiking trails in the area, such as the beautiful hikes in Ombretta Valley, or in Marmolada, thanks to its proximity to the Marmolada “Move to the top” cable car station, only a 15-minute walk away. 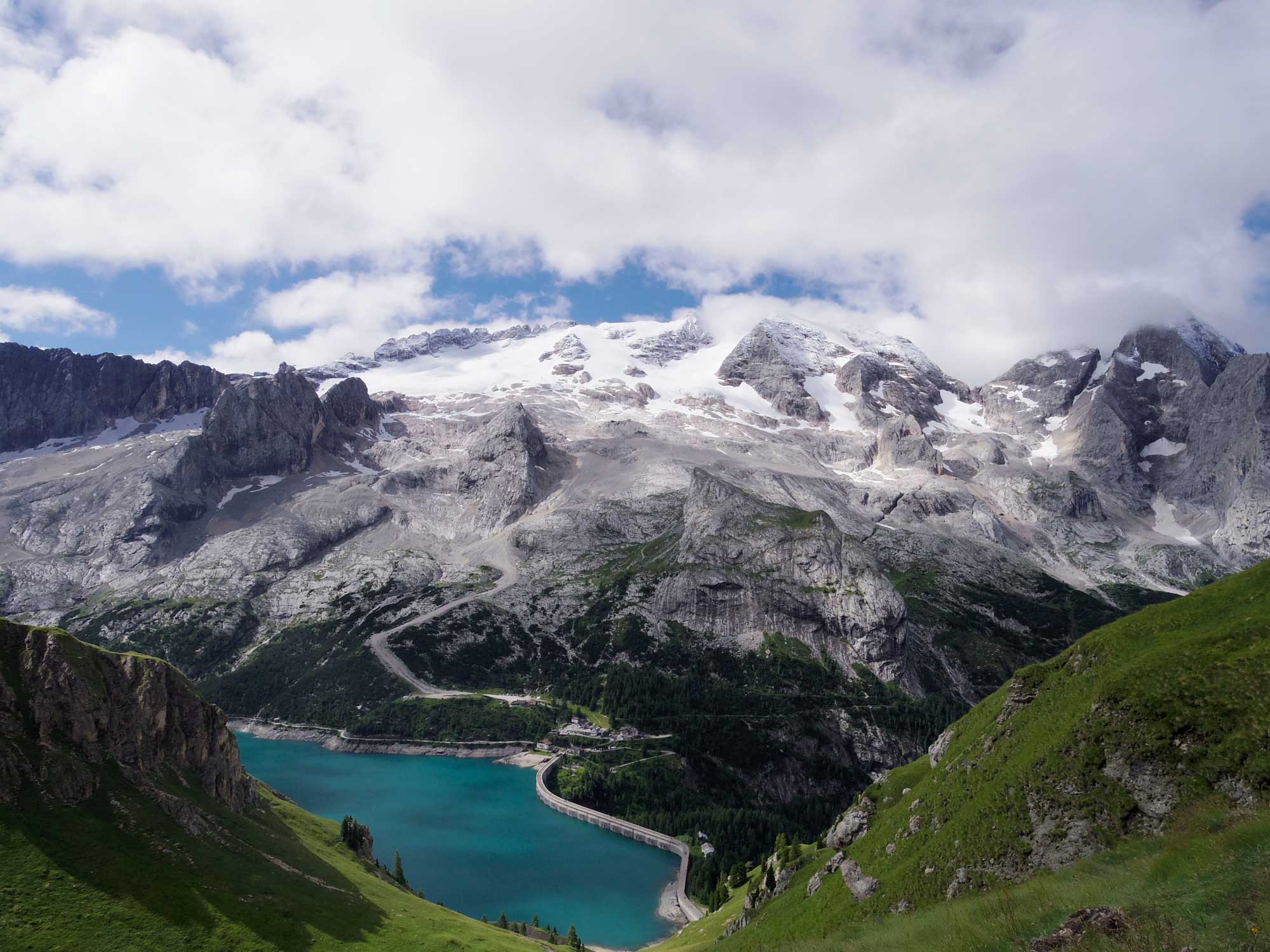 Starting from the summer 2022, the “Geological Trail of Arabba” will have new informational signage along the path, which allows hikers to discover interesting information about the complex and unique geological history of the Dolomites area.

But let’s cut to the chase: here are the best things to do in Malga Ciapela in summer. 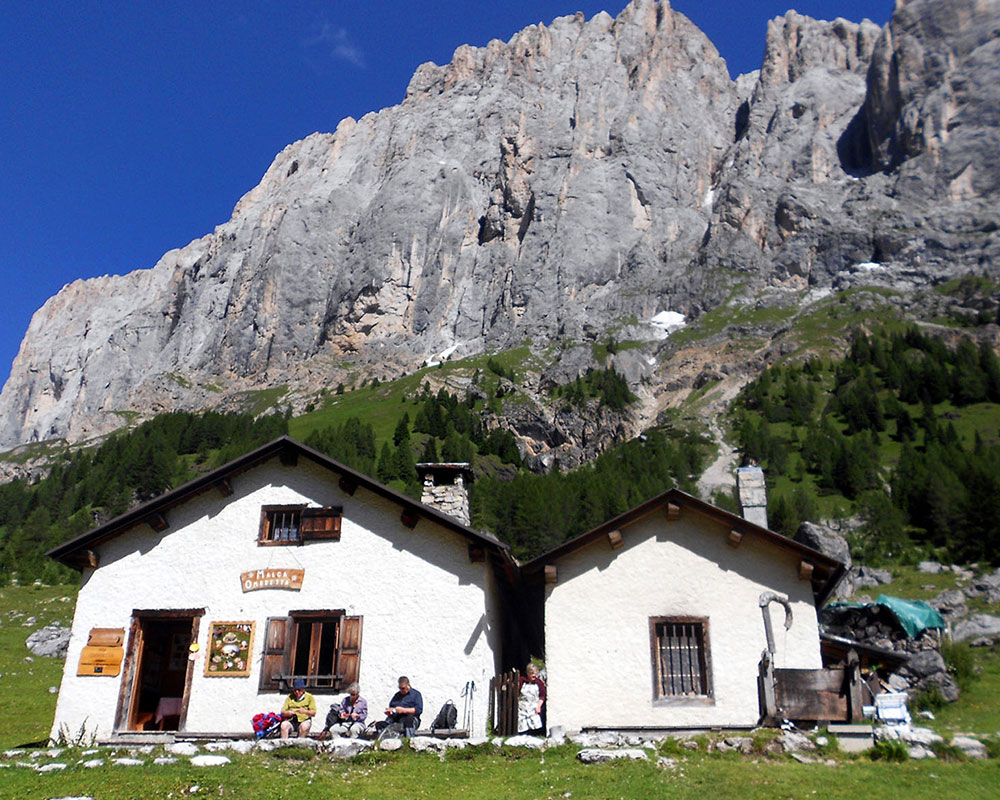 1. Enjoy an easy hike: the trail to Malga Ombretta

Malga Ombretta is a beautiful alpine hut with a small cheese factory attached and selling local products. Popular with guests are the homemade yogurt with berries and fresh whipped cream.

Val Ombretta is the true geographic center of the Dolomites: not far from the Malga, in fact, you can reach a wooden totem with a stone heart inside, symbolizing the "Heart of the Dolomites." 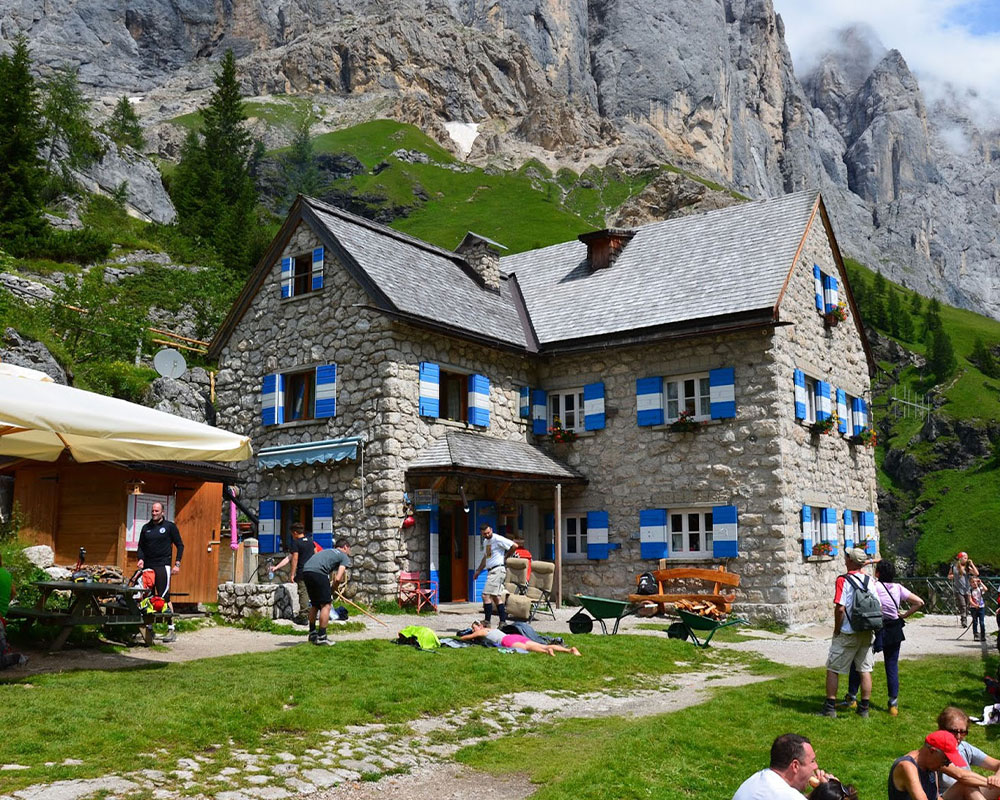 2. Walk the entire of Val Ombretta along the hike to Rifugio Falier

For those who wish to venture on a slightly more challenging hike than the one that ends at Malga Ombretta, it is possible to continue on to Rifugio Falier, following CAI Path 610, which leads to this beautiful refuge in about an hour's walk.

Along the path, once a mule-track of the Great War, you will always be overlooked by the impressive mass of the south face of the Marmolada, one of the most appreciated walls by mountaineers worldwide.

When you begin to glimpse the blue and white colors, typical of the shutters of Alpine huts, you will know you have almost reached your destination. Rifugio Falier hosts and welcomes many passing hikers and climbers who want to try their hand at the many routes on the South Face of the Marmolada. 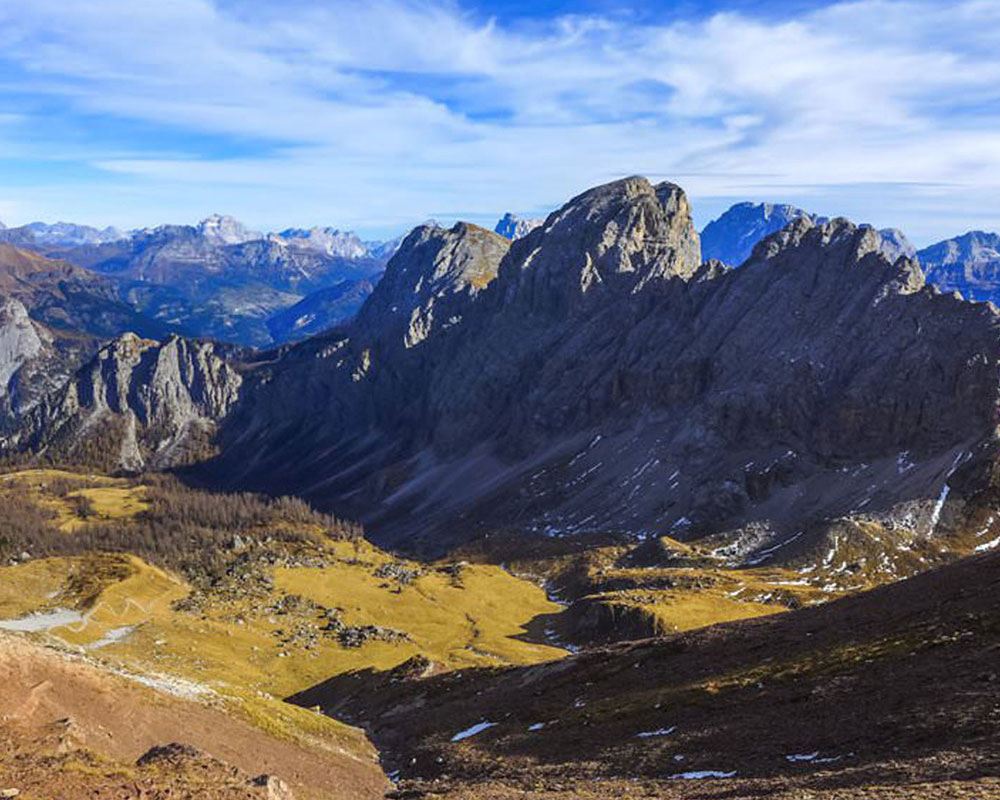 From the Marmolada Malga Ciapela Campground, one sets out in the direction of Agriturismo Malga Ciapela, following the signs. Once there, you take the same mule track that leads to Malga Ombretta and Rifugio Falier, then turn left once you reach a fork in the road, following the signs for Valle di Franzedas and Passo Forca Rossa. Malga Franzedas is located at 1980 m and can be reached in about an hour and a half's walk from the Marmolada Malga Ciapela Campsite, while getting to Passo Forca Rossa takes about 3h30 in total. 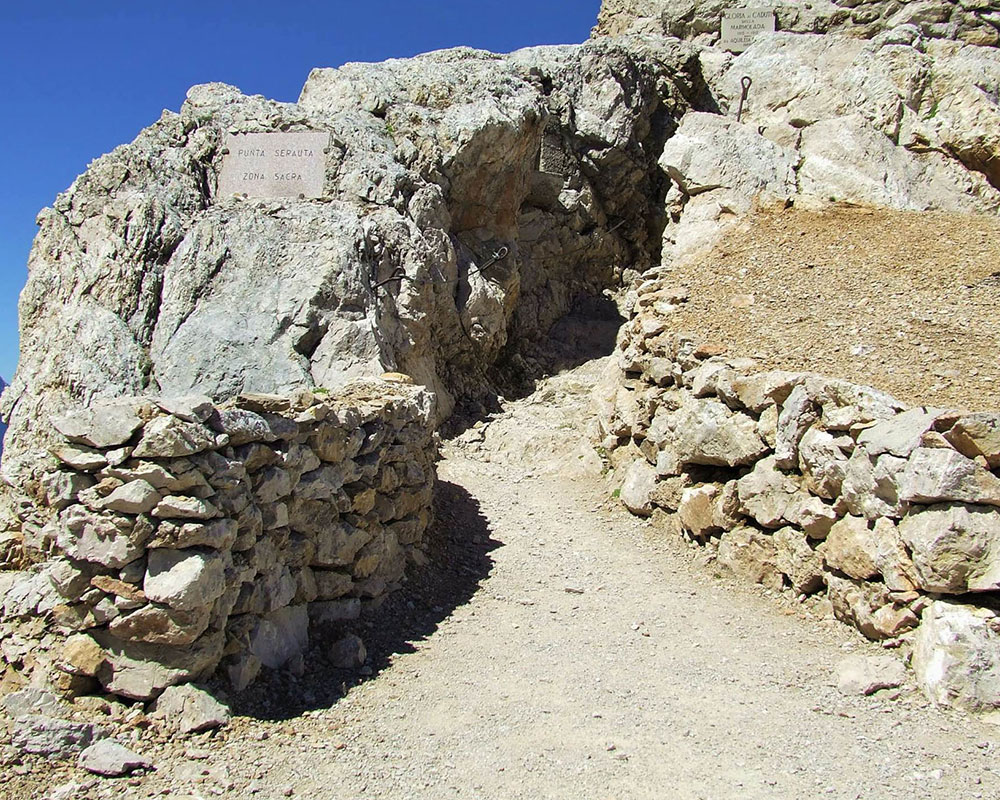 4.Visiting the Fortress of Punta Serauta

Travel time:
2:00 h (plus the travel time in the gondola)

A 5-minute walk from Camping Marmolada Malga Ciapela is the start of the Marmolada cable car, which, in addition to leading to the highest panoramic terrace in the Dolomites, makes it easy to reach places of extraordinary historical interest. On the ridges of these mountains, in fact, during the First World War was fought the White War, in which Italian and Austro-Hungarian soldiers competed in a mad fight in conditions that were, to say the least, extreme.

From the station of Serauta it is possible to discover the Fortilizio di Punta Serauta, a set of command posts, emplacements, shelters and trenches dating back to the Great War and built by the Italian soldiers who occupied the rocky ridge of Punta Serauta on April 30, 1916. To visit the fort, once you reach the Serauta station, you descend briefly to the fort of the same name, near which you will find an explanatory sign with a map of the route, along which you will visit the command cavern, infirmary, observatory and cable car station, among others.

In addition to the fort, also at the Serauta station it is possible to visit the Great War Museum, the highest museum in Europe (3,000 m), whose admission is included in the cable car ticket. 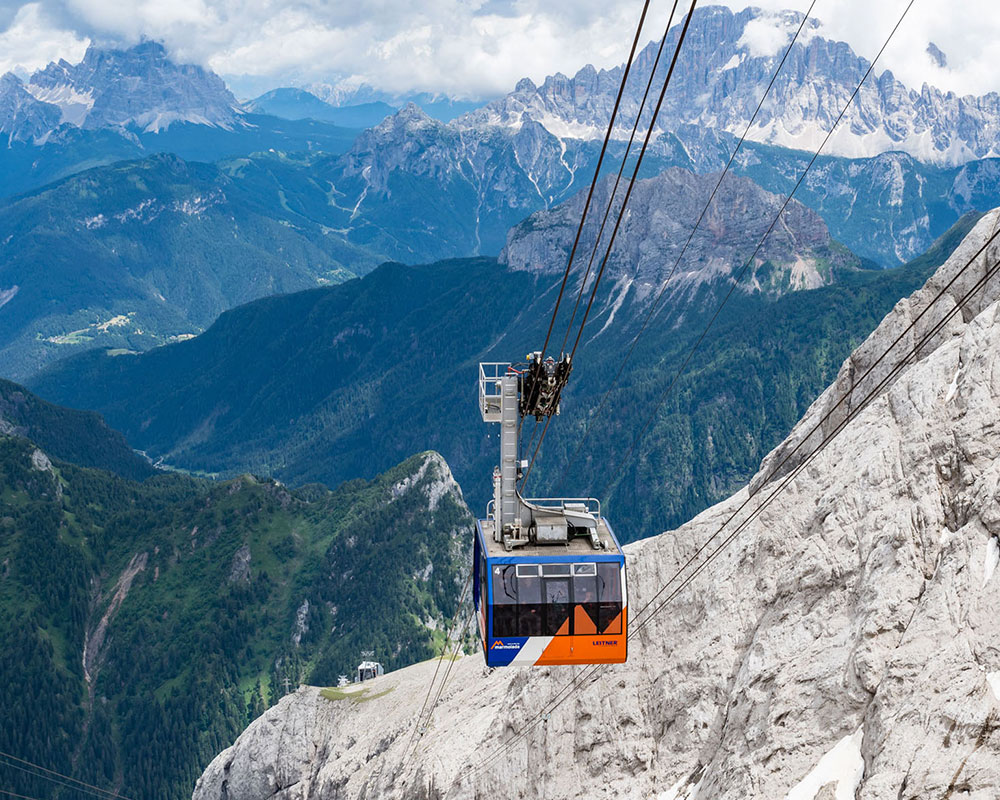 5. Climb to the highest point in the Dolomites: the Marmolada terrace

The proximity to the start of the Marmolada cable car makes the ascent to the highest terrace in the Dolomites a must via the three sections of the "Move to the Top" cable car, which leads from the 1450 m of Malga Ciapela to the 3265 m of Punta Rocca, where the panoramic terrace is located.

From here you can enjoy an incredible 360-degree view of the Dolomites: in the foreground soar the Sella and Sassolungo groups, but also Civetta, Pelmo, Tofane, Pale di San Martino, and many others.

At Punta Rocca, in addition to the terrace it is possible to visit the Grotta della Madonna, a cave similar to those that soldiers of the Great War dug during the conflict, consecrated by John Paul II during his visit to Marmolada on August 26, 1979.

For more information, visit the website
Move to the top 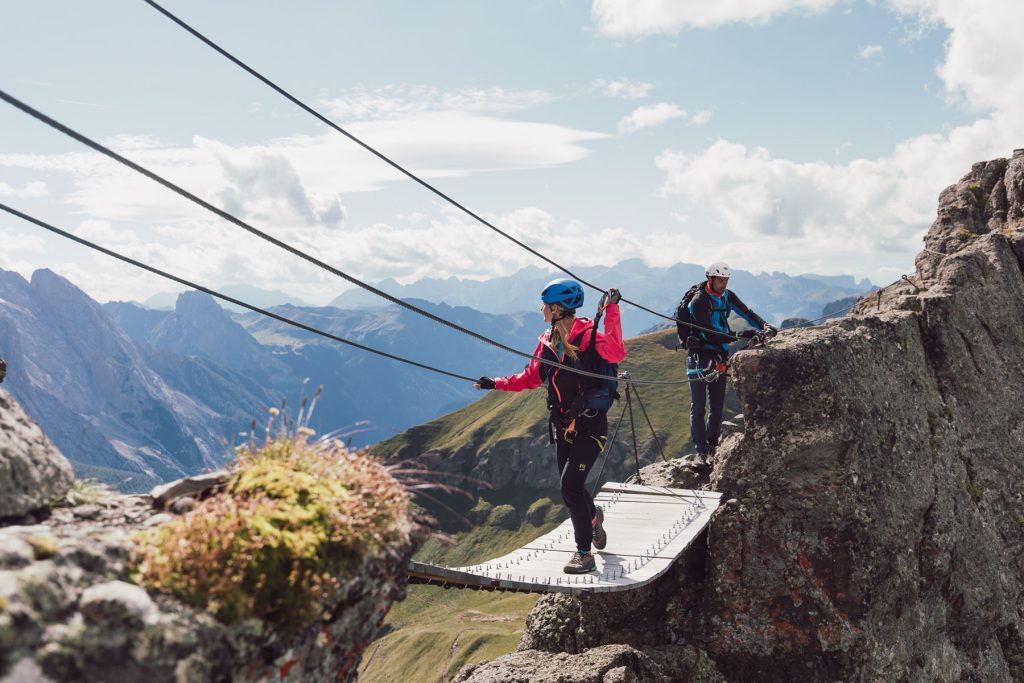 The approach of this medium-difficulty ferrata is located 15 minutes from the top station of Porta Vescovo and is marked by a white plaque. To get there from Malga Ciapela, there are two possibilities: go to Arabba by car (35-minute drive), and take the Porta Vescovo cable car. The second possibility is to drive to Passo Fedaia, and then climb to Porta Vescovo on foot along the 698 marker, arriving at the attack of the ferrata in about 1h 15' (variant for the more trained). The Ferrata delle Trincee runs along a ridge of volcanic rock separating Porta Vescovo from the Padon Pass, and retraces an Austrian trench line made during the Great War.

From Padon Pass, you can return to Porta Vescovo along CAI trail 680 in about 1h30', and descend to Arabba by lift (always check lift closing times); return to Passo Fedaia by equally following CAI trail 680 to Porta Vescovo, and at the junction with CAI trail 698 follow the signs to Passo Fedaia (2h walk from the Padon hut); descend to Arabba along trails 699 and 698 (2h30' walk). For a detailed description of the ferrata visit www.ferrate365.it 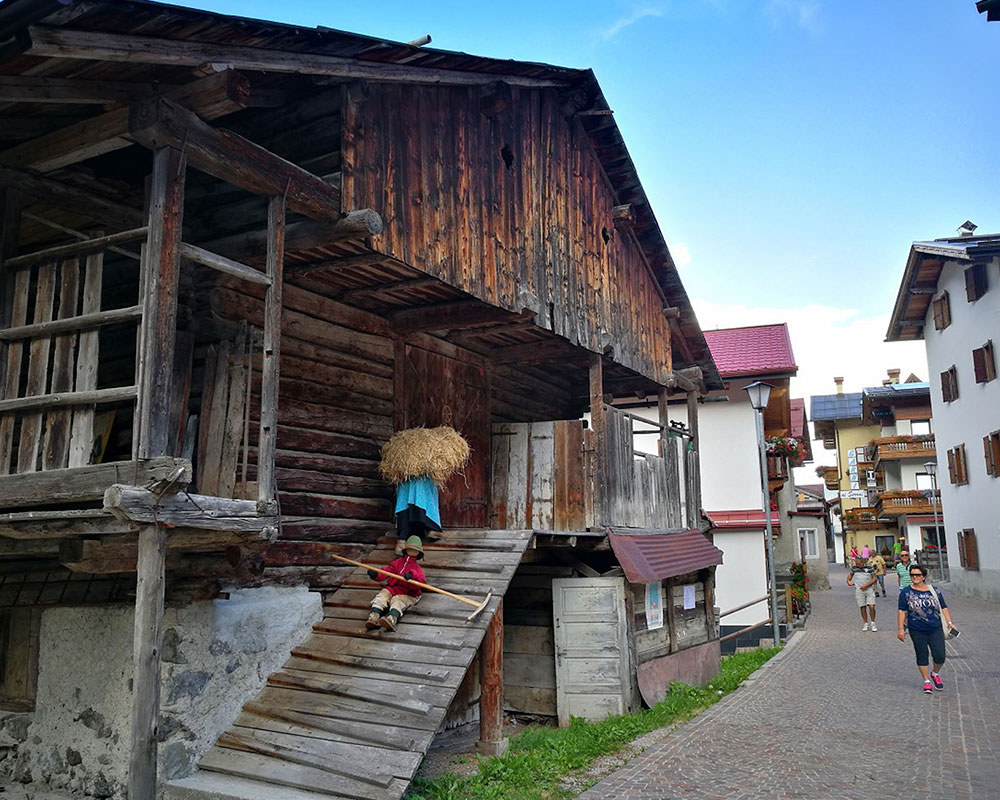 7. Visiting Sottoguda, one of the Most Beautiful Villages in Italy

A five-minute drive from Malga Ciapela is one of Italy's Most Beautiful Villages, Sottoguda, or Staguda in local Ladino. This charming Alpine village is best known for its handicrafts related to woodworking and ironwork: along the village streets, in fact, you can visit artisans' workshops where wrought iron objects such as the famous hand-painted butterflies or decorative objects made of beech wood are produced. Sottoguda has also kept many typical buildings unchanged, such as the tabièi, the barns typical of the rural world of the Dolomites, made of wood according to the Blockbau interlocking technique, and the stone houses, still visible in the center of the village. 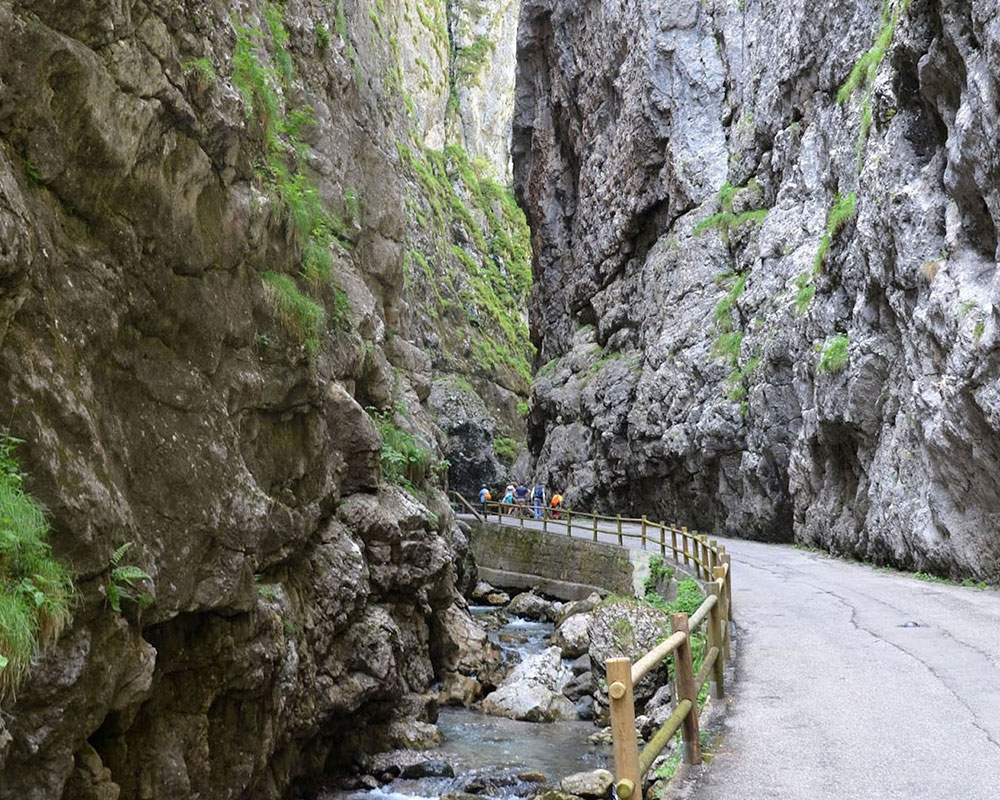 
Warning! As a result of the 2018 Vaia storm, the Sottoguda Serrai are closed for safety reasons as per the municipal ordinance.

One can get an idea of the incredible power of nature by contemplating how deeply erosion has shaped the environment in this approximately 2 km-long canyon, known as "Serrai di Sottoguda." The canyon was formed by erosion caused by the Pettorina River, and can be visited either from the village of Sottoguda, a 5-minute drive from Malga Ciapela, or from Malga Ciapela itself. The route is paved, so it is easily passable, and leads through a unique landscape scenery of gorges, ravines, and waterfalls that in winter turn into a spectacular ice arena. 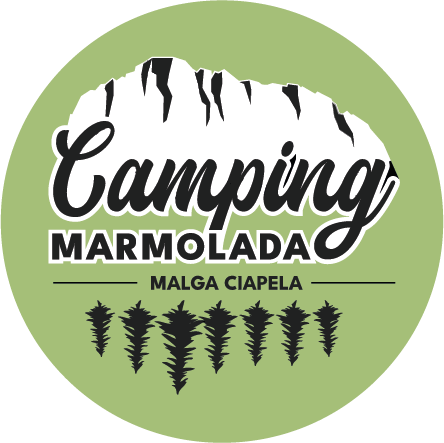 Google Analytics is a web analytics service provided by Google Ireland Limited (“Google”). Google uses the Personal Data collected to track and examine the use of this Application, compile reports on its activities and share them with other services developed by Google.
Google may use your Personal Data to contextualize and personalize ads in its advertising network.
This Google Analytics integration anonymizes your IP address. The anonymization works by shortening the IP address of the Users within the borders of the member states of the European Union or other countries that are members of the Agreement on the European Economic Area. Only in exceptional cases, the IP address will be sent to Google's servers and shortened within the United States.